﻿Robert Golden’s﻿ HOME exhibition, which was held at the Allsop Gallery, Bridport Art Centre in August 2012,
inspired a number of public meetings, workshops and discussions. This began a relationship with the local community,
as people came forward offering to participate in the developing HOME IN BRIDPORT PROJECT. 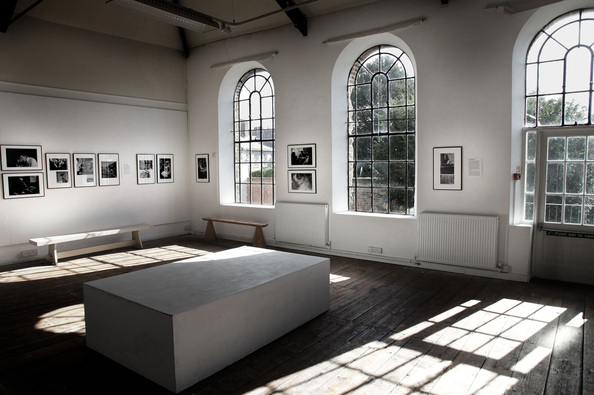 The HOME exhibition in the Allsop Gallery of the Bridport Art Centre, August 2012. Photo: Robert Golden
Some comments from the exhibition’s visitors book:-
“There is bias in everything we hear, read and see in the media every day – most of it not including the sort of stories that are being told through these images and commentary.  We need more of this, not less. Thank you to Robert Golden and the Arts Centre."

“These photographs are incredibly moving but the explanations written by Robert are very thought provoking
and bring the people and their struggles to life. Thank you."

It was as a result of the success of this exhibition and subsequent community interest that
Transition Town Bridport and the local Town Council became involved with the HOME project.
1
From October 2013 to April 2014, Claire Winterbottom, Rebecca Garner and Robert Golden gave workshops in fine art,
photography and film with 25 people from 11 to 60+ participating. The workshops resulted in a community exhibition
at the Allsop Gallery in May 2014 to celebrate the 40th year of the gallery being in town, called
THE HOME IN BRIDPORT EXHIBITION.  The exhibition was highly successful with over a thousand visitors attending. 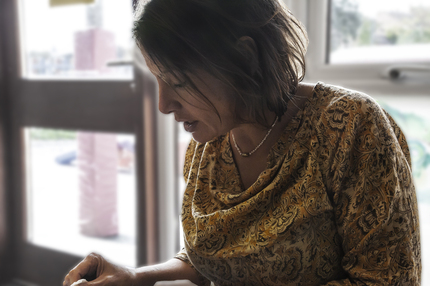 “Another facet of Bridport’s life and culture…Great stuff…very inspiring.  If only all towns were like this.”

The art work of those participating was of a very high quality and
documented the lives of local people in and around Bridport by local people.

In addition to the photographs and fine art work, two films were made by Danny Sullivan, a 22 year old
unemployed person who has studied film making. You can see Danny's ﻿I CAN'T﻿ here and his film about his grandfather, ﻿NOEL AND ME﻿  here.  Another  film was made by Makeda Downes, an 11 year old called ﻿MY FRIEND DIABETES﻿
which you can see by tapping on the film's name.
The workshops included locally sourced organic lunches provided by Sarah Wilberforce, Emma Burwood, Bob Middleton, Rebecca Garner and Caroline Walker. The food was not only delicious and nutritious but also created a warm communal environment and helped develop skills and knowledge of food and cookery. This led to short-term part-time employment for five people.
2
Sarah Wilberforce for Transition Town Bridport applied to the Heritage Lottery Fund for a grant to part finance the
making of a film about a local estate on the outskirts of Bridport, called Skilling, which suffers from social problems.
Robert Golden wrote and directed the film, called Homes for Heroes.
Through this esearch at the Bridport Heritage Centre, the Bridport Library archives and interviews,
the long and revealing heritage of the estate was brought to light along with the financial and material
heritage of the town's industry, the nature of its architecture and the remnants that define much
of the look of the town today. 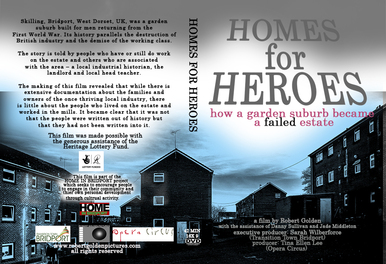 The film was shown as part of the HOME IN BRIDPORT  exhibition, in special showings and in local day care centres. This has caused discussion and some useful controversy about the need for revealing the hidden problems that many people suffer from within the town.  Several more screenings are planned and we are being encouraged to find ways to show the film nationally.
This project led to short-term part-time employment for 3 people.
See the whole film here.
3
The HOME team successfully raised funds from various sources to revive St Mary Primary School’s fruit and vegetable garden,
to install a poly-tunnel donated privately, and to provide manure, topsoil and mulch with assistance from
Groves Nurseries, Modbury Farm, and J.C. Phillips.
4
A number of community events have taken place to support the development of the garden and school including
the raising of the poly-tunnel, a community lunch for eighty people, the building of a Cobb Oven and
children’s activities including scarecrow making and an introduction to the Forest Schools.
5
Cookery classes, under the direction of school cook, Amanda Downes, assisted by Mel Hayter,  for children and their parents
have begun every other week.  They bring parents into the school community and develop trust.
This has led to part-time employment for two people.
6
Two teachers and two part time gardeners have been sponsored by the HOME IN BRIDPORT PROJECT to take part
in a Royal Horticultural Society Day at Bath City Farm where they learned about ideas for children’s gardening clubs.
7
Community First Plan
In 2014 HOME wrote a Community First Plan to help raise a small amount of funding to help develop
the cooking and growing programme at St. Mary's Primary School.
HOME also began discussions with MAGNA Housing Association
to explore the creation of a garden space, art and mosaic work and better
landscaping between the Alexander and Princess Road flats.

St Mary's is interested to develop the idea of turning the path between the school and the estate
into a more accessible and pleasurable walk - a "sensory path"-
to bring the school closer to the community.

A consultation document was developed with many of the residents of the flats to be used to guide this process.
This will include plans, in partnership with others, the creation of a bulk purchasing, larger growing, training scheme
and ways to source local fresh food at affordable prices.

This is an ongoing project which we hope to develop more in 2015.

Please see our plans and blog.